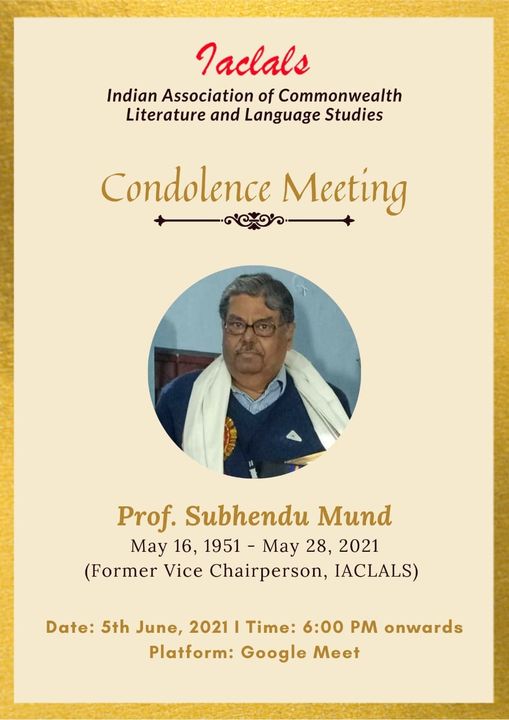 Dear friends,
​
With profound grief and shock, The IACLALS announces and deeply mourns the loss of Dr. Subhendu Mund who breathed his last at the age of 70 after suffering a heart attack on the morning of 28th May 2021. We express our sincere condolences to his bereaved family members and friends.

Dr. Mund was an outstanding academic, litterateur, lexicographer and translator with over 40 books and 100 research papers to his credit. Starting his teaching career in 1973, he was associated with various colleges and universities across Orissa. He retired as the Principal of BJB Autonomous College, Bhubaneswar, in 2009 and continued to be associated with IIT Bhubaneshwar. He was an internationally renowned scholar of Indian English literature, particularly of its early phase and his works are prescribed as course material both in India and abroad. His book, The Making of Indian English Literature, was recently published by Routledge in 2021.

Dr. Mund served as the Vice-President of IACLALS from 2014-20 wherein he was the Editor of the IACLALS Newsletter and remained a lively and integral part of all its Annual Conferences. But more than anything, Subhendu Mund cultivated and embodied the true spirit of being a member of the academic community by being accessible, affable, generous and encouraging towards all our members.

Subhendu Mund will be deeply missed by IACLALS. We join the entire academic community in paying tribute to his creative and academic scholarship and legacy.
​
Powered by